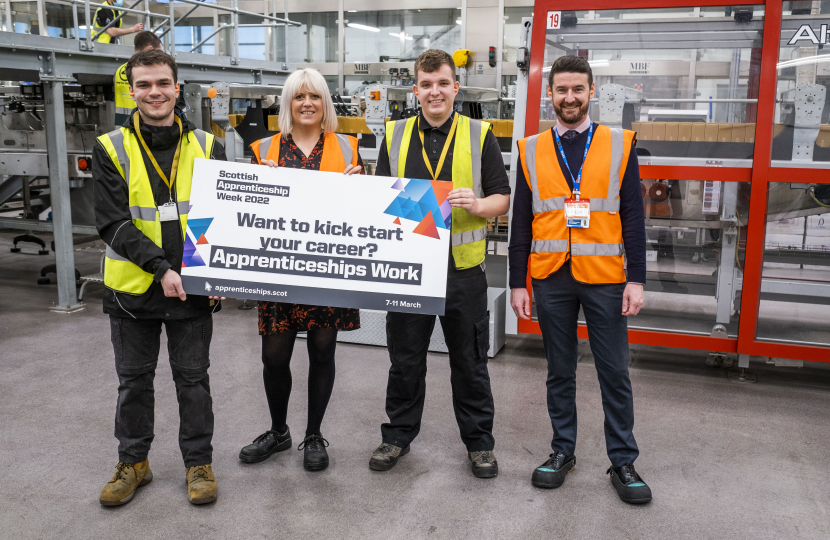 Scottish Conservative and Unionist MSP Sue Webber for the Lothian Region has shown her support for Scottish Apprenticeship Week by visiting Glenmorangie in West Lothian to meet with their apprentices.

Glenmorangie offers a tailored apprenticeship qualification demonstrating their commitment to the programme and the value it brings to their business, as well as the opportunities it presents young people. It offers a balance between learning and hands on experience within a team environment that nurtures and coaches them through the 14-month programme.

Sue spoke at length with the apprentices who all came from varying backgrounds – some had come direct from school, while others had graduated from university with degrees ranging from English Literature to Forensic Chemistry.

The week aims to shine a light on the role apprenticeships play in Scotland and how they affect people, businesses and the economy. Over 12,000 employers in Scotland provide apprenticeships, with that number said to be on the rise, according to Skills Development Scotland. They also say over 18,600 Modern Apprenticeships starts had been recorded by the final quarter of 2021/22, a statistic that has nearly doubled compared to the same time last year.

“Speaking to the apprentices has given me a real insight into the invaluable opportunity these positions present to them.

“Earning while they learn and gain formal qualifications from a world leading company, such as Glenmorangie, will accelerate their development and create a springboard for their careers.

“Glenmorangie are committed to the scheme and investing heavily in their enhanced training programme.  It as an opportunity to create high quality jobs, as well as upskill and expand their workforce.”