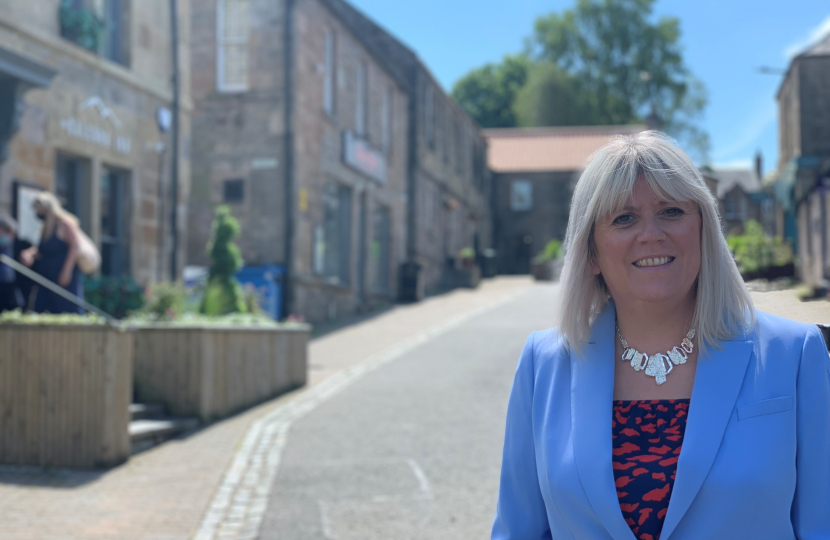 The future of Currie High School, road safety at Juniper Green Primary School, fighting for the rights of women whose lives have been ruined by mesh implants, and supporting the hundreds of people suffering from Long Covid are just four of the concerns she has raised.

Like all her Scottish Conservative colleagues, Sue has been dealing with real problems raised by constituents, while the SNP Scottish Government has switched its attention to an independence referendum which the majority of people do not want just now.

“So many vital Scottish public services are badly in need of reform, yet First Minister Nicola Sturgeon has chosen to waste valuable Government time and money on what will at best be a sham independence opinion poll because she knows she has no power to hold a referendum,” said Sue.

“The fact is most Scots do not want a referendum now, and this looks very like Nicola Sturgeon is using public money to pave her way out of Scottish politics when she inevitably fails to deliver the only thing which really interests her.

“She says tackling the cost-of-living crisis is a priority, yet she’s arguing that Scotland should follow a path which her own advisers admit would cost billions. Thankfully this is the one priority she can’t deliver.”

As an Edinburgh councillor, Sue worked tirelessly with the community in the successful campaign to save Currie Community High, her old school, and the Wester Hailes Education Centre from closure, but fears have grown about the impact of spiralling costs and construction delays on the programme to give the Currie community the state-of-the-art new school it was promised.

Sue has met with local parents and community leaders to understand their concerns and has met with senior councillor officers to emphasise that changes to the plans would not be acceptable.

She has been assured there will be no change to the specification, and while reassuring to an extent she is determined to keep up the pressure to make sure the commitment is honoured. However, concerns remain about the expected completion date.

“I would hate to see current pupils suffer from a lack of equipment and resources whilst we wait on the new school being completed,” said Sue. The current cohort of pupils cannot be forgotten and are just as entitled to being able to access first class resources as those who will come after them.”

Sue has expressed concerns about pro-cycling activists from beyond the catchment area trying to use children attending Juniper Green Primary School boost their campaign to keep the controversial “Spaces for People” changes to Lanark Road which have been opposed by a majority of the local community.

The activists deliberately chose Lanark Road to organise a “cycling-bus” to encourage children to cycle to the school, even though very few children at the school live there.

“I am very supportive of active travel and the principle of cycling-buses, but this was a blatant attempt to use children for a political campaign to retain a scheme which has actually been shown to be dangerous for children,” said Sue.

“I will continue to work with the school and parents to ensure children can get to their classes in safety, but there is something sinister in adults harnessing children to score wider political points.”

Sue has been at the forefront of the campaign to improve support for the hundreds of people who are suffering long-term effects of Covid infection, which continues to blight their lives.

“Thousands of people continue to suffer, unable to get back to work or to live fulfilling lives, but too often their plight is being ignored just because they no longer test positive,” said Sue.

“As infection rates remain at record levels, the effects of the pandemic will be with us for years and just because the death rates are low doesn’t mean it is any less devastating or those who continue to suffer.

Having spoken on the issue in the Scottish parliament, Sue will continue to campaign for improved services and support for Long Covid sufferers.

Hundreds of Scottish women whose lives have been ruined by vaginal mesh implants have been backed by Sue in their long-running campaign to get the treatment they need to end their suffering.

After raising their harrowing ordeals in the Scottish Parliament, the Scottish Government finally accepted that the specialist treatment in the USA they need should be provided free of charge, but Sue remains concerned that there are still barriers in their way.

“I argued that the women deserved to get free specialist treatment, after many of them were rebuffed by their health authority,” said Sue.

“But although health secretary Humza Yousaf has conceded the principle, the treatment these women desperately need can only be accessed after approval from the same authorities which have been obstructive in the first place.

“I do not intend to let this matter rest until the victim have received the treatment to which Mr Yousaf now says they are entitled to receive for free.”

As the new Convenor of the Scottish Parliament’s Education, Children and Young People’s Committee, Sue has been fully engaged in finalising the committee’s report into the Scottish Government’s Attainment Challenge

The investigation has focussed on recent findings by Audit Scotland that the attainment gap has widened during the pandemic and how this can be addressed.

“During its inquiry the Committee heard positive stories about the work being done by schools to tackle the poverty-related attainment gap,” said Sue.

“However, our report notes Audit Scotland’s conclusion that there has been limited progress on closing the poverty-related attainment gap and that inequalities have been worsened by Covid-19.

“It is essential that the reforms to the Government’s education agency ensure the new schools inspectorate is able to monitor the effectiveness of the implementation of plans to close the poverty-related attainment gap.”

With exam results due in early August, Sue is finding out how young people can access information about apprenticeships, employment, and training opportunities.

She’s due to visit the Skills Development Scotland Results Helpline facility in Glasgow where she’ll meet members of staff helping young people access information on vacancies at college and universities across the UK, but particularly about direct employment opportunities with training so school leavers can combine learning and earning.

As the Scottish Conservative’s shadow minister for drug policy, Sue has challenged the SNP to act on content of the Drugs Deaths Taskforce’s final report, Changing Lives, published last month.

The report has taken three years to produce, in which time drugs have killed literally thousands of Scots and the report calls for the SNP to accelerate plans to cut drug-related deaths, demanding that no-one should ever be turned away from treatment and not to use constitutional arguments to delay urgent action which can save lives.

“Many of the actions and recommendations could be addressed and tackled head on with a real sense of urgency if the Scottish Government decided to back our Right to Recovery Bill,” said Sue.

“Our Bill would provide a statutory right to addiction and recovery treatment services. This would include community-based, short- and long-term residential rehabilitation; community-based and residential detoxification; stabilisation services; and substitute prescribing services.

“I hear from exasperated families who are desperate for their loved one to recover, and our plans would prevent individuals seeking addiction treatment from being refused access to vital treatment.

“We have received support from a wide range of organisations with experience supporting people suffering from addiction.  The right to recovery Bill will saves lives.  And I hope the Scottish Government will see beyond political lines and come on board.”

Now the process of selecting a new national party leader has come down to a choice between ex-chancellor Rishi Sunak and Foreign Secretary Liz Truss, Sue is taking time to assess their policy positions and will be at the hustings in Perth to hear the candidates make their cases.

“Now we are down to two candidates I will be taking time to assess and understand their policy platforms, leadership style and determine who I think will be best to lead our country as we tackle the cost-of-living crisis and strengthen our economy.

“They must also address issues of integrity, culture and behaviour, which are very important to me. As of now, I am undecided and will be watching closely as the campaigns evolve.”